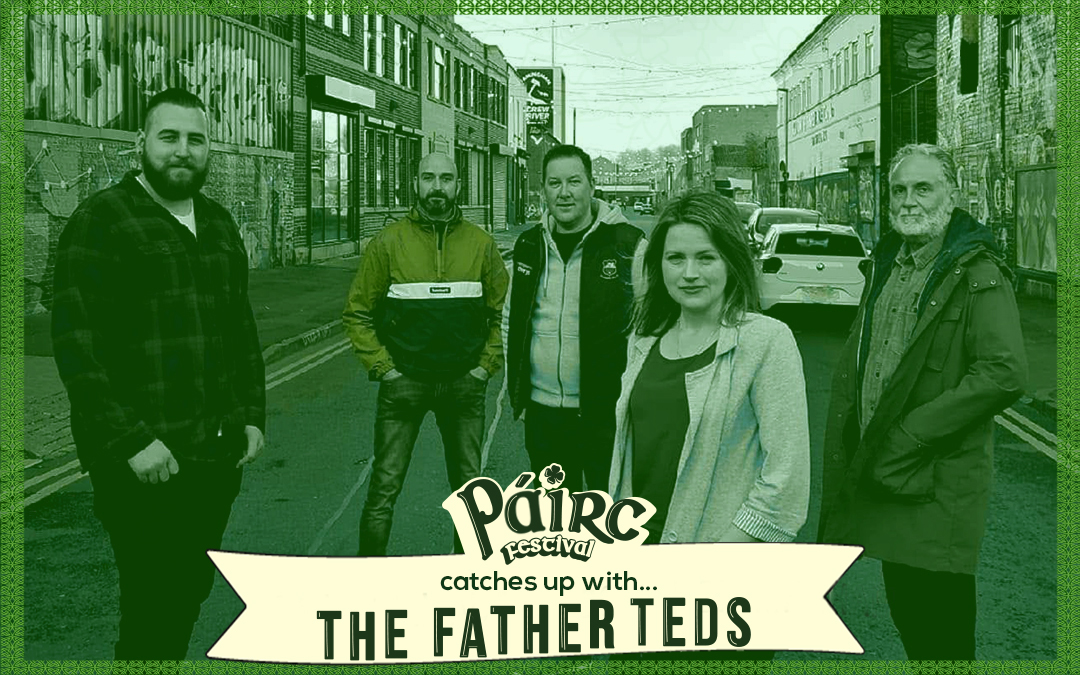 The Father Teds are a staple of the Birmingham Irish scene. The five-piece have been lighting up the local venues since their formation in 1996. Regulars at Digbeth’s Irish pub Nortons, The Father Teds can always be relied upon for a night of pop, rock and Irish classics.

With just under over month until Páirc Festival launches, we caught up with The Father Teds, re-introducing them to our Páirc audience and asking how they feel about playing a festival dedicated to celebrating Irish culture in their hometown.

PF: For those who may be new to The Father Teds, could you tell us a little bit about how the band was formed?

TFT: We formed by accident really back in 1995 when 2 friends met another 2 friends and The Father Teds were formed. We we’re (and still are) huge fans of the TV programme, hence why we went with the name.. we had no idea then that we’d still be going 27 years later!

TFT: We all grew up around Birmingham (some north, some south) and are all 2nd and 3rd generation Irish and very proud to be Birmingham Irish.

TFT: We were surrounded by Irish [culture] from a very early age, going to the dances with our parents to the likes of St Francis, St Teresa, St Annes and enjoying our pop and crisps whilst listening to the bands! We all learnt instruments when young, some of us competed I’m Fleadhs with the Comhaltas, great times.

TFT: Our musical influences cover virtually every genre within the band and that’s what makes it work, everyone brings something new and different to the mix.

PF: How long has each member been playing (their instrument)?

TFT: Years and years…. (can’t give away our ages) haha!

PF: That’s very fair! Maybe you could tell us about your first gig instead?

TFT: The 1st Father Teds Gig was in Pat O’Connells in Hurst Street  (changed to O’Neills in later days) brilliant atmosphere with the place packed of family and friends…and the rest is history

PF: How would you define being Birmingham Irish?

TFT: Birmingham Irish is something we should be all proud of, it’s a culture that has dominated Digbeth for many years with the many pub and clubs up to recent times. It’s about mixing with people with a similar story and passion as yourselves, the music the craic and a few pints!!

TFT: Everyone has their own favourite Irish song, in recent times we always get multiple requests each night for Galway Girl!

PF: And finally, what does it mean to the band to be playing Páirc Festival?

TFT: It’s brilliant to have the Páirc Festival in the city, we’re proud to be part of it alongside the best of Irish Music…it’s gonna be an amazing weekend!

The Father Teds play Páirc Festival on Saturday 27th August.
Follow The Teds on Facebook to keep up to date with future gigs and music releases.
Pick up Páirc Festival tickets here: https://paircfestival.com/tickets