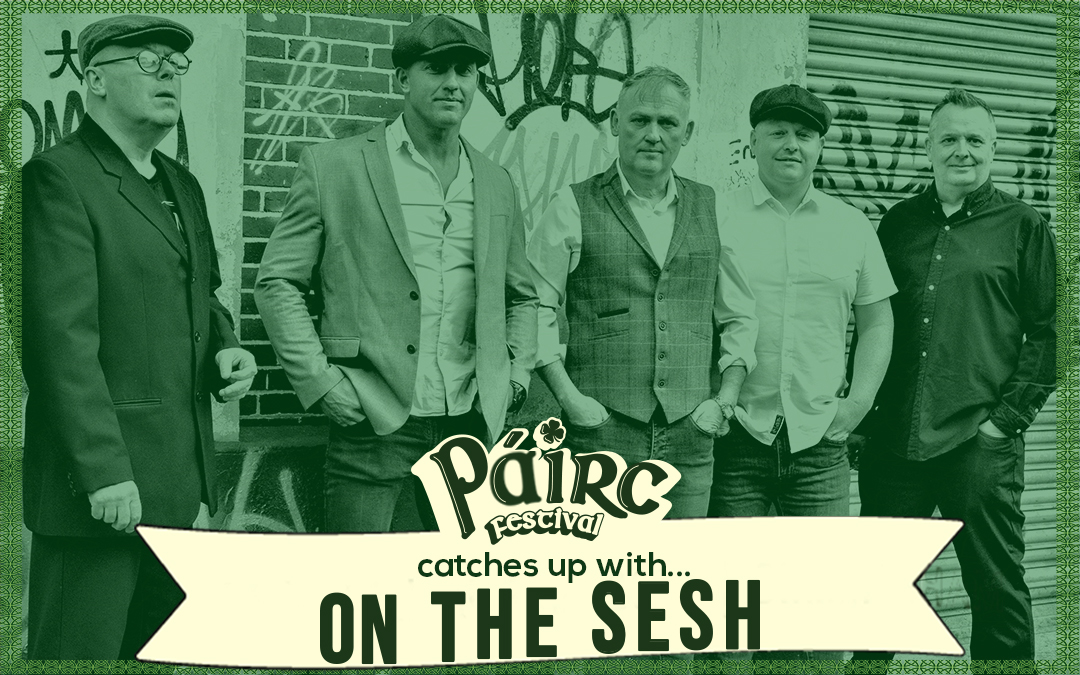 Páirc Festival Catchups: On the Sesh 

Since re-forming in 2019, On the Sesh have become one of Birmingham’s most popular Irish bands, bringing the party to local venues and weddings alike.

With Páirc Festival launching soon, we caught up with On The Sesh to re-introduce them to our Páirc audience and to see how they feel about playing a festival dedicated to celebrating Irish culture in their hometown.

PF: For those who may be new to On the Sesh, could you tell us a little bit about how the band was formed?

OTS: ‘On The Sesh’ finally got together in the back end of 2019, just before lockdown kicked in, so bad timing really to start a band! We all played in separate bands and at some point, one of us would end up stepping in for the others band, it was mentioned about getting a band together, but nothing happened for few years, then one night at a charity gig we all ended up playing together on stage knocking out a few tunes and having a bit of craic, and that’s what started it all off and here we are about to play perform at Páirc Festival in front 5k people!

OTS: We all were born, and grew up in Birmingham within this very large Irish community all around Digbeth, south side of the City

OTS: Mark & Gerry (Brothers) Mark (Guitar & singer) who played in the family band, ‘4 Aces’ & Gerry (Bass & Singer) first instrument was the accordion and taught by the well-known Paddy Molloy. Both playing music from the age of 10yrs of age, they have had a fantastic musical influence and guidance from their father Jimmy, who played with the Black Aces Show Band and sang in some of Ireland’s top Irish showbands back in the day

Bushy (Drummer) was introduced to his drum kit at the ripe old age of 9yrs old, he was asked to join his junior school’s orchestra and that’s when his journey and love for the drums started. Playing all genres in different bands as well as touring in Europe, finally jumping onto the Irish circuit

Tony (Keys) a professional musician, with great influence from his father who also played professionally in the music industry. Tony’s talent has taken him all over Europe and Ireland playing with top Irish Artists

Kevin (Singer & acoustic guitar) had encouragement from his mother and father Pat, who played in all the Irish pubs and clubs around Birmingham. Kevin started playing the guitar from the age of 12yrs, joined his local church folk choir, from that formed a band with friends and brother so they could play a gig at their secondary school and became overnight rock stars!!!!!!! Since then, Kevin has played in numerous bands, of which one of the members is now his wife Margaret.

OTS: This question was put forward to the lads, and so many different influences was thrown into the pot, it would take a week to reel them all off, the influences ranged from Irish/American country/Irish folk all the way to Soul/Ska and good ole fashion Rock ‘n’ Roll. The most important thing is that we realised, is that our parents influenced us at the very beginning and this shaped and moulded our lives ever since.

PF: What are your favourite Birmingham venues to play?

OTS: Well now, do you think we are going to really answer that one!!! (All of them of course!) 😉

PF: What does being Birmingham Irish mean to you?

OTS: As a band and all of us being of both Irish and English background, it gives more freedom to reach out and blend our Irish influence with all the other genre of music that we play. So, to round it off, we count it a blessing and a privilege to share our music with people and bring the odd smile to a few faces!

OTS: To be honest, usually the LAST ONE!! We tend to find the likes of The Saw Doctor’s and The Pogues and over the past few years Nathan Carter & Derek Ryan music gets the crowds singing along, not only does it get the Irish crowds going but people from all different backgrounds are drawn in!

PF: What does playing Páirc Festival mean to you?

OTS: What does playing at ‘Páirc Festival 2022’ mean to us, fingers crossed, it will be a brilliant experience for us all, a chance to meet with fellow musicians and hopefully make lots of new friends. Páirc Festival is offering a vast range of Irish influenced music and artist to Birmingham, a new event to be enjoyed and embraced by both the Irish and wider community and hopefully people will travel from far and wide to see what the Páirc Festival can offer!

Here’s to Park Festival 2022 being one of many to come!

On The Sesh play Páirc Festival on Sunday 28th August. The new singles, A Rainy Night in Soho, My Girl, and Las Vegas (In the Hills of Donegal) can be found on Spotify. You can follow On the Sesh on Facebook to keep up with future gigs and new music releases.