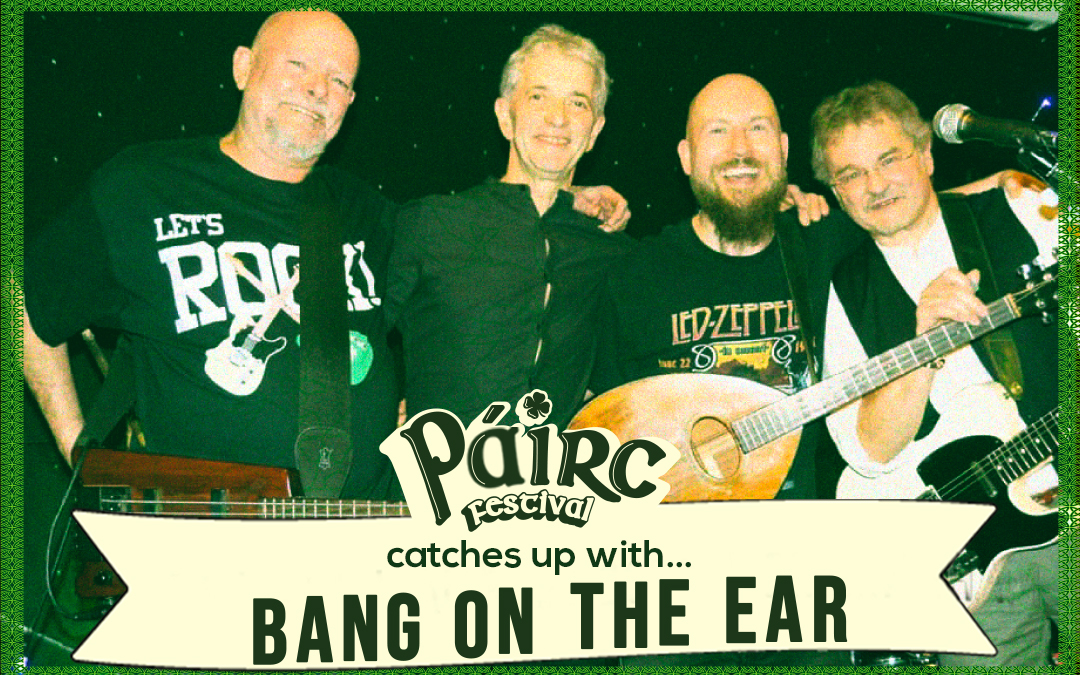 Bang on the Ear

Bang on the Ear began playing in 1997, combining a folk sound with traditional Irish music. The four-piece have been touring ever since, fulfilling their promise that when they play “foot stomping good time will be had by all.”

With Páirc Festival launching soon, we caught up with Bang on the Ear to re-introduce them to our Páirc audience and to see how they feel about playing a festival dedicated to celebrating Irish culture in their hometown.

How did Bang on the Ear form?

BotE formed in early 1996. Kelvin (Singer/Guitarist) and Jez (Violin) worked together in a guitar shop in Birmingham, and Kel invited Jez to join his newly formed folk band. Jez introduced traditional Irish music into the groups existing repertoire and the transition began, quickly turning the band into an Irish band.

Where did each of you grow up? Was there a large Irish community there?

Birmingham and the Black Country mostly. Definitely yes, there was and still is a large Irish community in Birmingham and surrounding areas.

How were you first introduced to Irish music?

Personally, Jez (Violin) was introduced to Irish music when he walked into a local pub to find an Irish duo playing. This started his obsession including starting to learn violin. Brian Patton (twice, All Ireland Fiddle Champion) took him under his wing and started him on his journey into learning Irish fiddle tunes.

Who are your musical influences?

How long has each member been playing (their instrument)?

Do you have any memories of your first gig?

BotE started gigging around 1997, performing in local folk clubs. Then landed their first ‘professional’ gig playing for O’Neill’s in Tamworth. This lead to then playing pretty much every O’Neill’s pub within the Midlands for 20 years.

What are your favourite Birmingham venues to play?

What does being Birmingham Irish mean to you?

It’s a proud heritage, and thanks to Riverdance featuring in the Eurovision Song Contest in 1994, the attitude towards Irish culture changed overnight, which in turn, opened the doors for us to carve our niche that’s lasted through 25 years of spreading the joy of Irish music.

In your experience, are there any songs you know will be a guaranteed hit with Irish crowds?

There are many traditional standards that guarantee a positive response, the Fields of Athernry, the Wild Rover, Whiskey in the Jar, Dirty Old Town, the Irish Rover etc all guaranteed floor fillers!!

What does playing Páirc Festival mean to you?

After existing for 25 years, playing various pubs, clubs, festivals and private parties including Weddings, Birthdays and Funerals, being on the bill with the likes of Finbar Furey, Sharon Shannon etc is an absolute honour. We can’t wait to be a part of this fantastic event, and long may it continue!

Bang on the Ear play Páirc Festival on Sunday 28th August. You can follow Bang on the Ear on Facebook to keep up with future gigs, bookings and new music releases.
Find tickets here: https://paircfestival.com/tickets