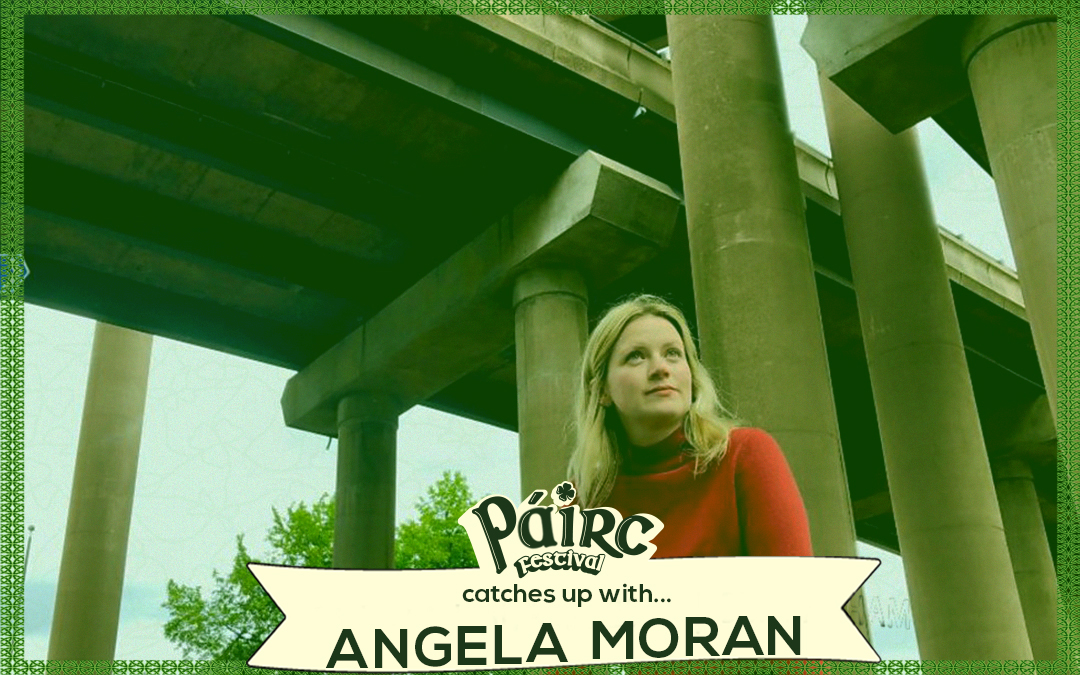 Angela Moran is an independent researcher, musician, and a specialist in Irish and popular music. She is the author of Irish Music Abroad: Diasporic Sounds in Birmingham, presented A Very British History: Birmingham Irish I Am for BBC4 and plays the fiddle in local Birmingham Irish band The Father Teds.

I was exploring Birmingham Irish culture before I even realised that’s what I was doing! Growing up in Birmingham was fantastic because I encountered Irish culture through real, lived experiences – from my Irish Dancing classes at Our Lady of the Wayside parish hall, to watching the GAA at Vaughan’s Hall Green, and, of course, all the music at the Irish Centre in Digbeth.

Sometimes it takes leaving a place to see the beauty in it.  Like many of us second and third generation, I weaved that thread between being Irish in England, but sounding English in Ireland and while I was away studying at University College Dublin, it felt increasingly important to look back to Birmingham and acknowledge the dynamic Irish community there.  By considering the Birmingham Irish community much more consciously, I discovered a narrative that is fascinating, underplayed, and reflected in Birmingham’s unique Irish culture.

You play fiddle in The Father Teds, a well-established Birmingham Irish band, how did you start playing the fiddle?

I was lucky at primary school in being picked for violin and was loaned my first instrument by the teacher. It was a sixteenth size fiddle (about 35cm long), so miniature that people used to ask if it was a real instrument or an ornament.  Soon after bringing it home, I was taken up to John Fitzgerald at Minstrel Music to pick up a copy of Jigs, Reels and Hornpipes. Family dos were always full of ceol agus craic and I sat amongst my aunts, uncles, and cousins, playing tunes out of the book, if only to prove that this tiny fiddle was no ornament!

Around that time, I experienced my first Dubliners gig at Birmingham Town Hall. The band members would often be in the foyer afterwards and I’ll never forget meeting the fiddler John Sheahan, a huge inspiration, who advised me, ‘Stick with it’.  There was no way I’d give up playing fiddle after hearing that.

Was Irish music a big part of your life growing up?

Music was my life growing up. Irish music lit up my soul and I was always mesmerised watching our local Irish bands, Drowsy Maggie, Shenanigans and, yes, The Father Teds! But music in Birmingham, a reflection of the people themselves, was a real melting pot and I engaged with various genres here: playing classical and pop, taking piano exams and rehearsing every Saturday at Aston University with the Midland Youth Orchestra.

When I was 12, Birmingham Symphony Hall hosted a record-breaking attempt, the World’s Largest Orchestra. Somewhat remarkably, myself, fellow fiddler Maureen Finglass, bodhrán player Jenna Underwood, and a troop of young dancers trained by Rose Ellis at Sean Eireann Irish Dance Academy were asked to provide interval entertainment for the record breakers.  This massive orchestra along with its conductor, the illustrious Sir Simon Rattle, watched and cheered as we performed Irish music and dance on stage.  It was the first time I had played Irish music for an audience beyond the Irish community and the occasion really opened my eyes to the huge appetite there was for our culture, not only among the Birmingham Irish, but across the whole city.

What Birmingham venues or locations do you associate most closely with the Birmingham Irish community?

The Birmingham Irish Centre was a natural home.  Most of our family gatherings took place here. I watched many bands in the back room (later the Leinster Suite) and took Irish Dancing lessons in the upstairs space.  More recently, I attended Birmingham Irish Heritage Group evenings, and the Irish language lessons run by Terri Lynk in the Connaught Bar.

More generally, Birmingham Town Hall, although not ostensibly Irish, has always welcomed lots of local and visiting Irish musicians.  It was here that I discovered idols such as Mick Hipkiss, Cara Dillon and Mary Black and it’s telling that The Dublin Legends, undoubtedly in high demand every March, often choose this as their venue for St Patrick’s Day gigs.  Then, there’s the thrill of seeing Selfridges lit up in green for St Patrick’s Day and Pairc na hEireann, bordering Birmingham Airport, is always a welcome sight, a little piece of Ireland over here, whenever I’ve just landed back from Dublin, Knock or Shannon.

In your book, the Birmingham St Patrick’s Day Parade is evidence of Irish culture moving from local communities to a city-wide celebration. What do you think an event like Páirc Festival achieves?

To have the biggest celebration of Irish music and culture taking place in Birmingham is such a moment!  Páirc Festival is unique in combining international Irish acts and local Birmingham Irish acts and this, in itself, speaks volumes for the thriving, outward-looking, progressive Irish scene here.

We know from the St Patrick’s Day Parade how adept Birmingham is in celebrating itself through Irishness and in inviting everybody to be part of that.  The pandemic has created such a thirst for public gatherings of Irishness, for live music and for reuniting our communities. Páirc is the festival we’ve been waiting for.

You have written many wonderful words on the relationship between music and community but if you had to describe the Birmingham Irish Music community in three words what would they be?