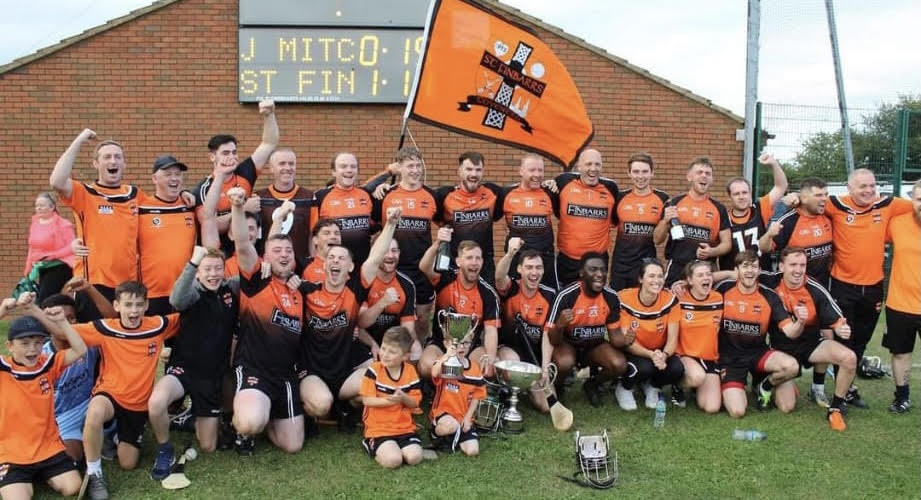 A strong Mitchels side stayed within reach of Finbarr’s seeing points from Oisin Coffey, Breen Fallon, Colm Kavanagh and Niall Shalvey.  Both teams fought tooth and nail but a red card handed to Oisin Coffey gave Finbarr’s the advance they needed. Finbarr’s came out on top with a narrow score line of 0-7 to 0-5 at the end of the first half.

At the second whistle Mitchels were not prepared to bow out.  A goal from Fallon brought Mitchels within reach of Finbarrs. But a man down, they could not fend off Finbarr’s attack; a blitz of goals from James Ogandre, Magee, and Lenihan sealed Mitchels’ fate.  Finbarr’s consolidated their lead and finished on top with a final score 3-12 to 1-12.

With their second consecutive League Title under their belts, Finbarr’s are on strong footing as they look ahead towards the Warwickshire Hurling Championship.

The current Warwickshire County Champions are hoping to repeat history and retain their title.  Wexford camog Jackie Quigley is currently managing the side with Assistant Coach Robert Duggan.

Quigley looks forward to leading the men in their Championship campaign: “We have four to six weeks and we’re hoping to get challenge games with Northern teams.  Ideally we need to get as much match fitness as possible.

“You can train all you like but you need match practice. The lads are very positive, we’re going for back to back titles and have a couple of new signings who have come over for college and work.

“Now that we have won the league and there are upcoming fixtures we have momentum to train. We look forward to hopefully reclaiming our County Title”.